As a child, I knew that "Miss" would ALWAYS accompany the name of whomever I was speaking to. The adults in my life that is. What I didn't know was that this was not always the case. I was never taught that, in official circles, back in the day, they were never worthy of such a title.

Growing up, I was called lots of things. Aside from "nigger" being the obvious choice, "red bone", "half breed", "Oreo", and, my favorite, "monkey". I am pretty sure there were many others that I have since blocked out because I have always just been me. I remember when someone would call me a bitch, I would matter-of-factly respond that it was "Miss Bitch" ensuring that they knew to put respect the name they chose to use for me. In the end, their words didn't matter . . . until they did.

So, Imagine my sheer and utter glee to find out that a Black Woman who, when it wasn't fashionable, decided that she was going to get the "R-E-S-P-E-C-T" (you can insert Aretha right now) she deserved to have put on her name while being put on trial  for demanding said respect. Say what?!

Yep, I said it. My girl took her case all the way to the Supreme Court (you know, when it used to mean something). But wait, I think I got ahead of myself. So, first, let me introduce Mary Hamilton. She was a true BADASS Black woman who, even in the face of extreme adversity, never backed down from anybody. NOBODY!

the woman behind the title

Mary Hamilton was a Black civil rights activist who was a member of the Congress of Racial Equality (CORE), as one of only two female field secretaries, and then the Southern Regional Director. She was also a Freedom Rider. She was known for her highly effective community organizing for non-violent protests. Having been arrested numerous times for organizing and participating in these protests, she had more than enough experience with the police and the judicial system. She was beaten, jailed, harrassed again and again but it never stopped her.

Never one to back down, she would insist that police, politicians and judges address her properly, as they did white women. This was not common practice in the 60's (y'all realize that this was only 40 years ago right? Like this wasn't way-way back in the day, but less than half a century) for white folks, especially within the judicial system, to show respect to anybody who wasn't white.

the power of language

Why does this matter? Because, in the 1960's, white people refused to use I mean, honorifics when referring to Black people as this courtesy was only reserved for whites. On top of the usual "girl" when referring to women or "boy" when referring to men, they would simply use the first name instead of using "Miss," "Mrs." or "Mr." to show respect. Of course it is because they didn't have any but still, language matters.

I think Barbara McCaskill, an English Professor at the University of Georgia, said it best: "Language is significant because language calls attention to whether or not we value the humanity of people that we are interacting with. [The idea of segregation] was to remind Arfican-Americans and people of color in general, in every possible way, that we were not equal, that we were inferior, that we were not capable." Think about it, if you spend enough time telling someone that they don't have any value, at some point, they begin to believe the same about themselves. We see these tactics used with abusers in domestic violence situations. We gave it a name when Patty Hearst robbed a bank with her kidnappers.

Interestingly enough, 400+ years of consistent verbal, physical and institutionalized dehumanization of Black folks and we are told to simply "get over it."

"my name is Miss Hamilton"

In 1963, she was arrested for picketing in Gadsden, Alabama. Although her being arrested was not new, what happened next changed history for Black women and men.

While being questioned by the prosecutor, Mary refused to answer his questions because he kept calling her "Mary." She told him she wouldn't answer him until he addressed her properly, he wouldn't. Instead he tried to make the judge get her to answer but that didn't work either. She went off on the judge too! Don't take my word for it, see how this exchange went for yourself. 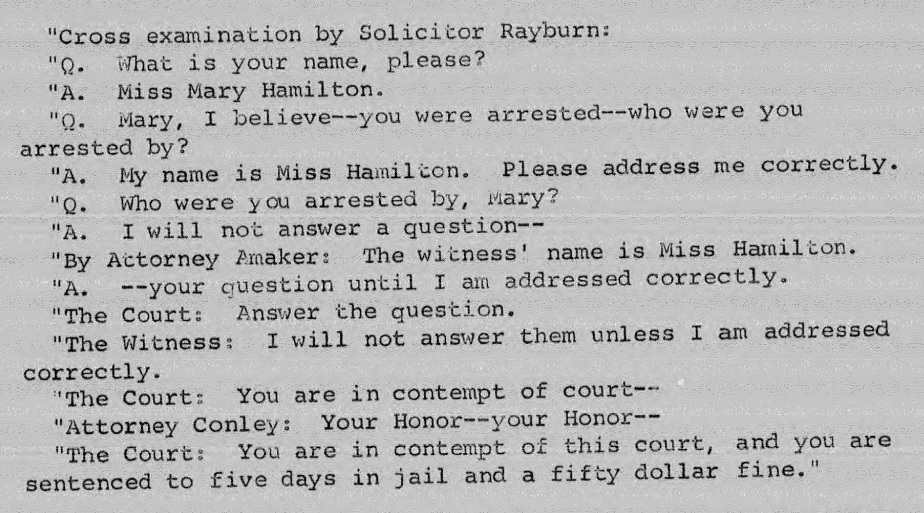 So the judge got mad at this "uppity" Black woman and he found her to be in contempt of court, fined her $50, and sentenced her to 5 days in jail. Well, she was not having any of that so she appealed the decision. The Supreme Court of Alabama upheld her contempt charge citing that she had been asked a lawful question and, since she did not invoke a valid legal exemption to support her refusal to answer it, the judge was well within his judicial discretion to charge her with contempt. What is noteworthy in this decision, is that the court felt it important to point out that "[t]he record conclusively shows that petitioner's name is Mary Hamilton, not Miss Mary Hamilton."

Well, that didn't go over well with Mary or her lawyer. They appealed the ruling of the Supreme Court of Alabama to the Supreme Court of the United States (SCOTUS) which granted her petition. On March 30, 1963, the U.S. Supreme Court reversed the Alabama ruling on the grounds of equal protection and due process. For those not familiar with 'legalese' that means that MISS MARY HAMILTON WON!

Yes, a Black woman, fighting for civil rights to be seen as a 'person' who had value took on the judicial system, as well as the racist system, and won the right to be addressed with respect.

it all makes sense now

I used to think it was an old fashioned practice to always call the people in my life "Miss" or "Mr." but now I see what it really meant. See, while white folks refused to give Black folks even a piece of dignity, Black women and men gave that overdue respect to each other. They used the honorifics to show that, even if it was within their own households or communities, they valued each other. They saw each other.

What is funny is that I have taught my children, especially when addressing Bllack women, that they must use "Miss" before the name. There are still too many areas where Black women are devalued and dismissed, and words matter . . . until they don't.